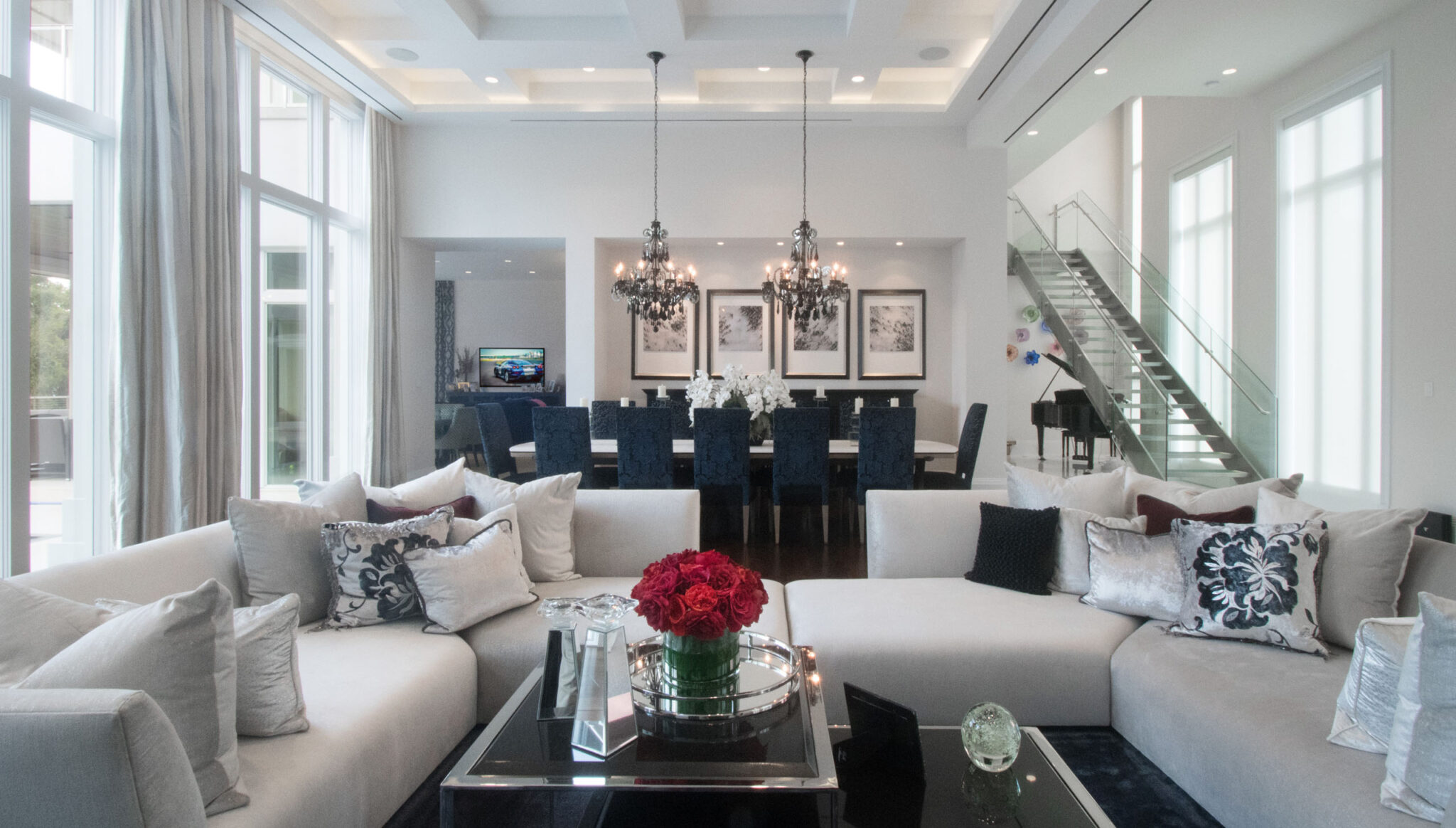 The Living Areas in the Poulter Home

“One of the most satisfying aspects of this project is that Ian and his family use every piece of technology we installed,” says Will Gilbert, partner at Think Simple. “It’s a beautiful home, but it’s a practical family home as well, used every day.”

At 10,000 square feet, the house is large, but not overwhelmingly so. It includes a formal living room and dining room, a family room, music room, eat-in kitchen, entertainment areas including a home theater, pool and billiards room, a fitness center, and six upstairs bedrooms. Outdoors there’s a driveway with basketball, a patio with pool, and a back yard that Ian and his kids use to play a variety of games as well for informal practice of golf.

In upgrading to Crestron Home, Poulter and his family gained elegantly simple control of their entertainment, lighting, shading, climate and security systems, all of them accessed from wall-mounted 10.1” Crestron touch panels, their own phones and tablets, and, for the lighting system, Crestron Horizon keypads.  Think Simple programmed a number of preset audio, video and lighting scenes to make it extremely simple to set up this large house for entertaining, playing, or relaxing.

The music system was a priority for the family, mainly as a background for the many activities they enjoy. Whether shooting hoops on the driveway, swinging a club in the yard, cooking or working out in the fitness room or golf simulator, they can choose from any of 11 on-air and Internet streaming channels or play music from their phones, tablets or laptops. The system has 21 audio zones, and family members can send their music to any or all of them inside and outside the house.

As active as they are, the family can relax with a 32-zone video system, watching movies and video in 4K from AppleTV, sports on US and British TV, or movies from their extensive DVD and BlueRay collection. “One thing Ian wanted to hold onto from the original video system was his Kaleidescape movie server,” Gilbert says.  His setup automatically ingests and makes instantly available up to 3,600 DVDs or 600 Blu-ray Discs.

A new Crestron NVX IP video distribution system handles all of the video streaming, allowing family members to watch the same video in multiple rooms simultaneously or choose their own content in other combinations of rooms. So, for example, Ian may be watching his favorite European football team, Arsenal, in the family room, but then walk over to the kitchen for a snack, and not miss any of the action. While he’s doing that, Katie may be watching a movie while the kids play video games in the theater.

A setup like this might encourage family members to keep apart, each watching their own screens, but that’s not the case in the Poulter household. There’s a multi-screen Crestron processor in the theater, allowing Ian to watch Arsenal or formula racing on one section of the screen, while the kids might play video games on another. Other rooms have two or more TVs, allowing Ian to keep an eye on a race or ball game while the kids watch a video.