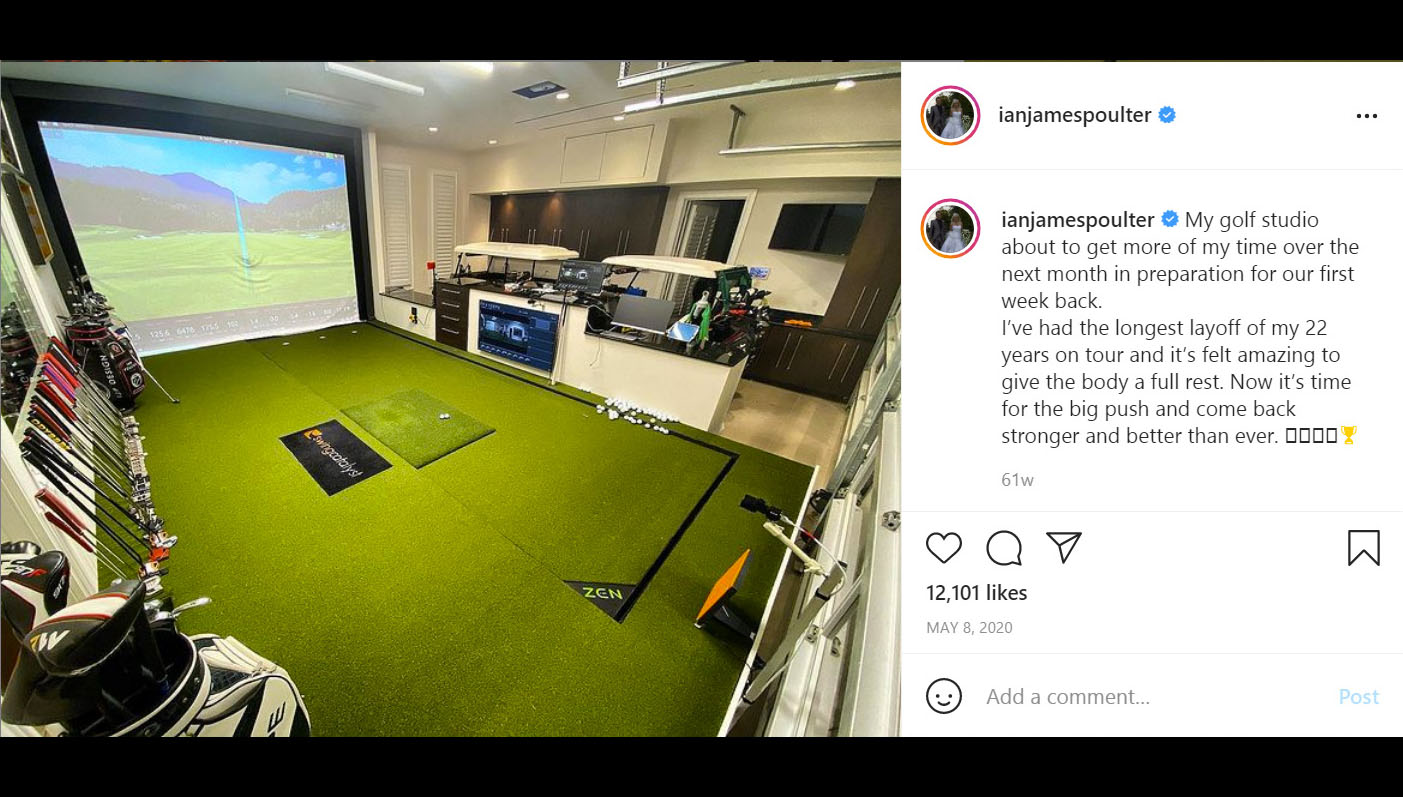 Ian Poulter has long been known as a clutch player, famously helping Team Europe win “the Miracle in Medinah” in 2012 with five consecutive birdies. It was not only the greatest comeback in Ryder Cup history, but one of the greatest in all of sports.

He attributes a large portion of his success to his practice regimen, spending hours each day on the driving range and putting green honing his game.

It’s not guesswork. A crucial part of Poulter’s long game is knowing how to place a ball the exact distance he needs and keep it within a foot or two to the left or right of his target. When putting, he’s an expert with any kind of lie, dropping shot after shot no matter what the conditions.

As a teenager with little money, Poulter recalls placing umbrellas point-first into the ground at specific distances on the driving range, then driving or chipping ball after ball into each of them. Today he uses a Trackman device instead. Consisting of a video camera and radar gun placed behind the tee, it tells him the exact distance of each of his shots and gives him a visual record that he can review on his laptop.

Of course, indoor practice is as important to professional golfers today as outdoor. Indoor simulators give them the ability to practice every day, no matter what the weather or their schedules. A good simulator can also provide unique opportunities for repetitive practice, together with enhanced video feedback.  So when Think Simple started working on the upgrades to his house, Poulter asked Will Gilbert to suggest upgrades to the golf studio in his garage.

They started with a few simple ideas. “Wouldn’t it be great to bring the TrackMan indoors?” Gilbert asked. Yes, Poulter agreed. But then the discussion turned to more elaborate upgrades.

“Ian had recently seen the Zen Green Stage putting platform on a trip to the British Open, and he asked if we could add that to his studio as well,” Gilbert recalls. Green Stage is an electronically-controlled platform that can change its contours in three dimensions, allowing golfers to practice on virtually any kind of lie.

“It’s a large platform and space was at an absolute premium, so it was hard to make this work,” Gilbert explains. “Ian already had a professional golf simulator, together with Swing Catalyst, which combines a pressure plate that Ian stands on when hitting full shots with a video analysis platform. It measures his center of gravity and weight transfer, giving him feedback on his swing.”

The team soon realized that, to fit both platforms, Poulter would have to be hitting tee shots and fairway shots, as well as putting, off the Green Stage. “On the one hand, the pressure plate has to be exactly level to operate,” Gilbert explains. “But on the other hand, if he could vary the contour where he hits the ball, that could be a major advantage, as now Ian would be able to practice fairway shots from uneven lies.” The solution was a split platform, with the left side immobile to hold the pressure plate but the right side adjustable as both a fairway and putting green.

Next Poulter asked about PuttView, a training system gaining popularity among PGA and European Tour players. PuttView uses a computer and projector to calculate, then project the ideal putting line onto the surface of an indoor green. Adding PuttView to the Green Stage platform would allow Poulter the ability to not only to choose the slope and tilt of his putting surface, but visualize the ideal path to the pin. In this way, he could practice each shot over and over, polishing his judgment and muscle memory until it became nearly automatic.

Finally, the team had to redesign the mechanics of the golf simulator, mounting a new projector and new screen but carefully holding the required distances so the screen would not recoil when Poulter was hitting with his woods.

“Modifying the simulator was very challenging, particularly since we would be combining systems from four different manufacturers, who were not able to help us integrate each others’ technology,” Gilbert explains. “Then too, all of these systems are usually installed in new construction, where you can plan the layout of the room as well as the platforms and geometry required, but in our case Ian’s house was already built and we were retrofitting.

“We were lucky in that the existing ceiling allowed us to properly mount the projector for PuttView, but it still took 15 different renderings and studies to get everything just right.”

Think Simple also added some small refinements, such as the use of Epson laser projectors to improve brightness and minimize the need for maintenance. They also added the golf studio to the home’s Crestron audio system, so Poulter can listen to music as he practices.

In the end, Think Simple gave Poulter a practice tool that no other professional golfer can match. It fits well into a practice regimen that has helped build him into one of the sport’s premier clutch players.

“Ian loves it,” Gilbert says. You can view the simulator in action from the links above, as well as a video of Poulter describing his training methods on the Golf Channel.